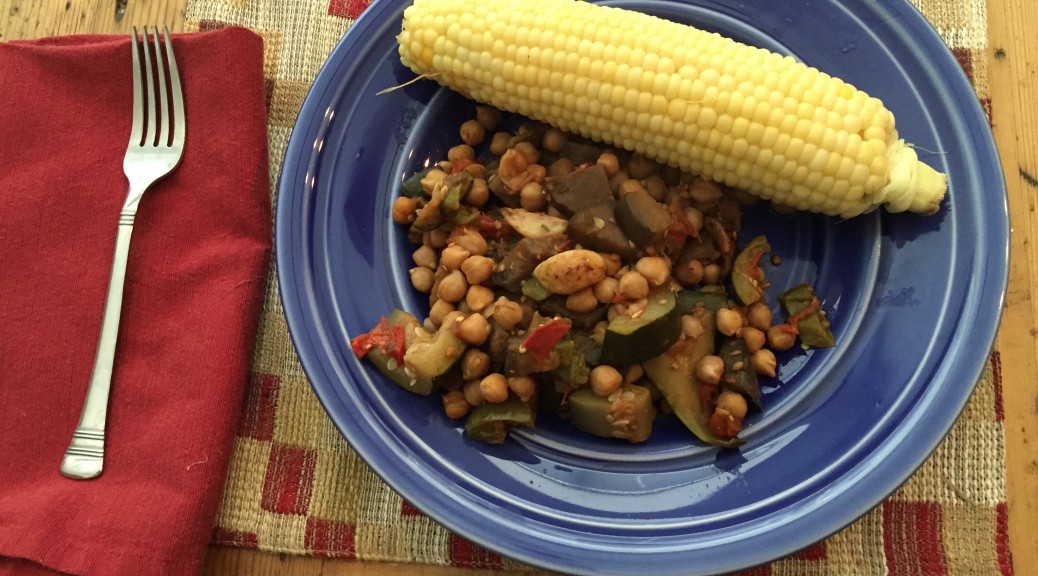 Right now during this Earth time of year when the tomatoes are plentiful, the string beans tasty, the eggplants gorgeous, and the peaches amazing, I think about cooking. Not that I don’t the rest of the year, but for a vegetarian the plenty of the harvest is as close to nirvana as I can imagine.

I belong to a CSA, Community Supported Agriculture where you buy directly from the farmers a share in what is being harvested. This week I received peppers, (red & green), zucchini, tomatoes, garlic, and eggplant. And I could only think of making a wonderful Ratatouille. I didn’t make a savory concoction, but made it with some seasonings that I really prefer. So here is my latest experiment. I hope you like it. If it’s a little loose, it’s because I didn’t write anything down while I was creating it. And as they say season to taste.

Soak Garbanzo beans for 8 hours. Discard the water and then adding more water, cook at medium for 40 minutes. While the garbanzo beans are cooking chop the vegetables. Drain the water from the pot. Place the beans and vegetables, oil and spices and a ½ cup of water in a crock pot set for 3 hours at low. The great thing about doing it this way is while olive oil is used the vegetables are not fried. And there is the time for the vegetables and beans to cook and absorb the flavor of the cumin and coriander.

In the picture you can see that I added an ear of corn, another gift from my CSA, but you could easily make a grain such as brown rice or quinoa, which would be fantastic.