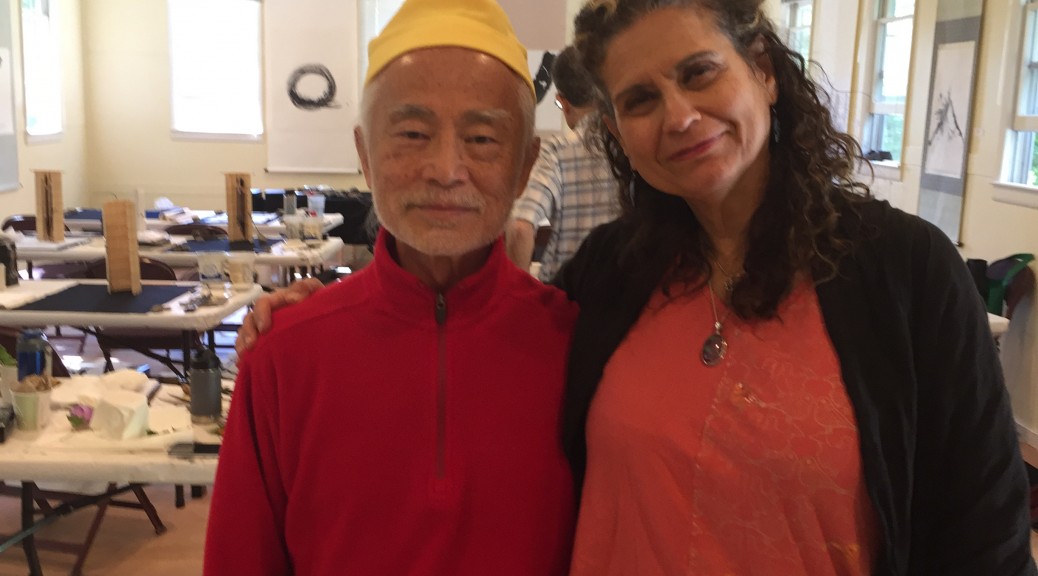 Most people when they think about summer vacations the choice is between the mountains or the beach. For me it was a little different this year. I decided against a trip abroad or one to the beach. Instead, I decided to give myself something off the beaten track. I went to Omega Institute to take a class on Zen and Creativity with Alok Hsu Kwang-han with Raylene Abbott.

I met this couple last year at a showing of the documentary Moving From Emptiness: The Life and Art of a Zen Dude. During the film, I was struck by Alok’s authenticity, and open-heartedness and how he embraced life and creativity. There are certain books like Taoism and Creativity, which I have reread many times. This movie is like that, you can actually watch several times and see something that you hadn’t seen before. Whether it’s the dedication to heal suffering, or willingness to be playful, there is always something there. The way that he paints is a spiritual practice. So I took the plunge and for the first time in my life, went off to take a painting/creativity/zen class for a week.

The class was not on how to draw an orchid, or tree. The class was on finding the spaciousness of creativity within. How often do we describe another person as being so creative as if they possessed something that we could never have? This class was the antidote for this kind of thought. The way Alok teaches is that one finds the space within of emptiness and presence, and not knowing to prepare to have the brush meet the paper.

He would say statements like: “When the self is not present; creativity happens on its own.” The process was learning to get out of the way of the creativity. When there is no self, we discover many virtues of dignity and beauty.   He broke it down into four things: being present, available, playful and in the unknown.

Being with Raylene Abbott supported the creative inner forces. We would take walks and look at the land and the flowers and through her deep understanding and listening we would learn how to be in easier relationship with nature. There’s a flow in the natural world that we can’t imitate but can feel within.

I would have been happy just doing the activity for 5 days. I was not creating expectations for myself to acquire a new skill as I often do in workshops. There were breakthroughs where I was able to find these empty and present moments, which allowed the creativity to happen.

I had a wonderful vacation. Finding the way to access this creativity is a gift.